( The large bedroom in the iKON dorm is practically a war zone, if a war zone meant the standard mess of the room's occupants combined with the additional toy set up on the floor. Most of the green soldiers remain inside of the bucket but a few stand atop it and scattered about, facing several alien squeak toys. Off to the side sits Bullseye, with skinny strips of paper taped below his eyes like tears, leaning against Lenny the Binoculars while Mr. Spell flashes an encouraging 'EVERYTHING WILL BE OKAY' on its screen. In the middle of this display rests another sheet of printed paper, the formal conclusion of the sudden 'official' court proceedings - who allowed the soldiers to act as lawyer and judge? Well...perhaps the toys really are falling into chaos. ) 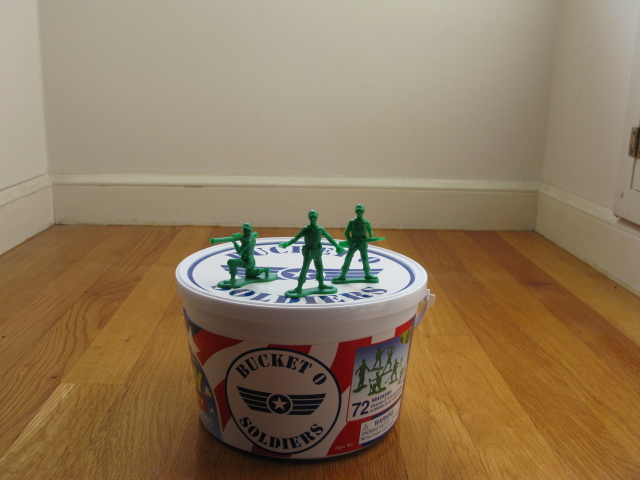 JESSE THE YODELING COWGIRL V.S. EVERYONE ELSE

In the case of Miss Jesse vs Everyone, we the court and the honorable Judge General Sarge rule in favor of the prosecution. Miss Jesse is guilty of all charges. (Theft and deceit against the toy community, possession of private property, and bearing arms in the no carry zone of the kitchen.) It is the court's belief that Miss Jesse intentionaly sabotaged the dutiful Sheriff Woody and incapacitated him, removing him from the dorm by means of her more substantial height and the extension of the arm of one Mr. Potatohead. The Potatohead was unable to provide a report himself to the court due to a present lack of mouth or face of any kind. Thus putting Miss Jesse at further risk for a second trial at a tba date for attempted murder.
At the present time, we uphold the prosecution against the defense lawyers whose argument of 'Ooooooooooooooh' and 'Aaaaaaaaaaaaah' upon the sight of Woody's hat raised in the air made their entire defense (also of 'ooooh's and 'aaaah's) moot. The character witness brought to the stand, one Bullseye the horse, was unable to provide any more colorful commentary than 'NEIGH' as translated by court translator Mr. Spell.
These are the proceedings of the first official trial under the rule of the honorable Judge General Sarge. Prisoner Jesse has been removed to a retaining cell. This ruling will hold so long as Sheriff Woody is not present to fulfill his duties as the leader of the toy police force and co. The jury, consisting of 11 green soldiers and one green dinosaur (a fair jury, as the soldiers' combined heights equal that of the dinosaur) have been dismissed.